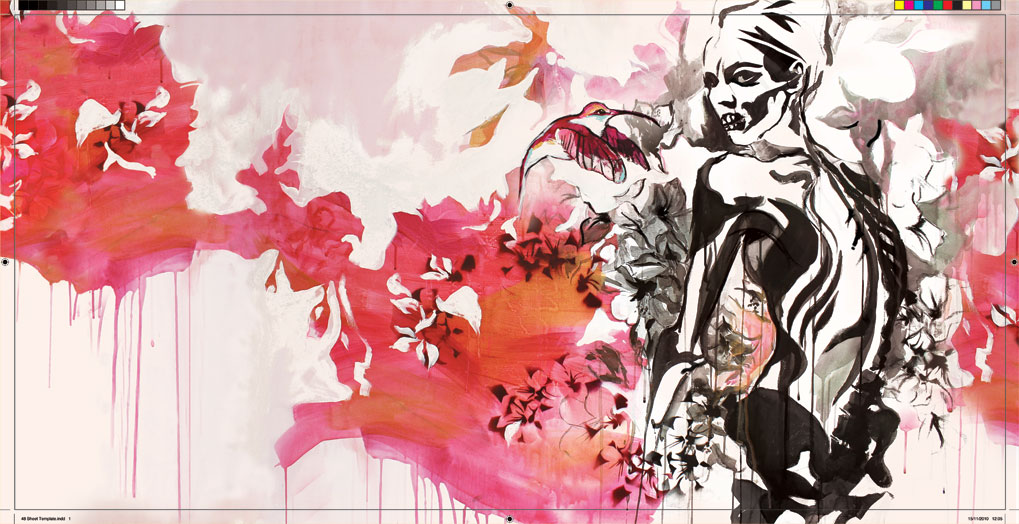 It is common feature of marketing today to use images of glamorous men and women to draw the eye, push a message and sell a product. Yet what these adverts don’t tell us is that the beauty standard that we are bombarded with every day is impossible to achieve. And this, is the whole point. Companies spend millions of pounds telling us we look awful, so that they can then sell us an unending stream of products that promise to make us look a little better. 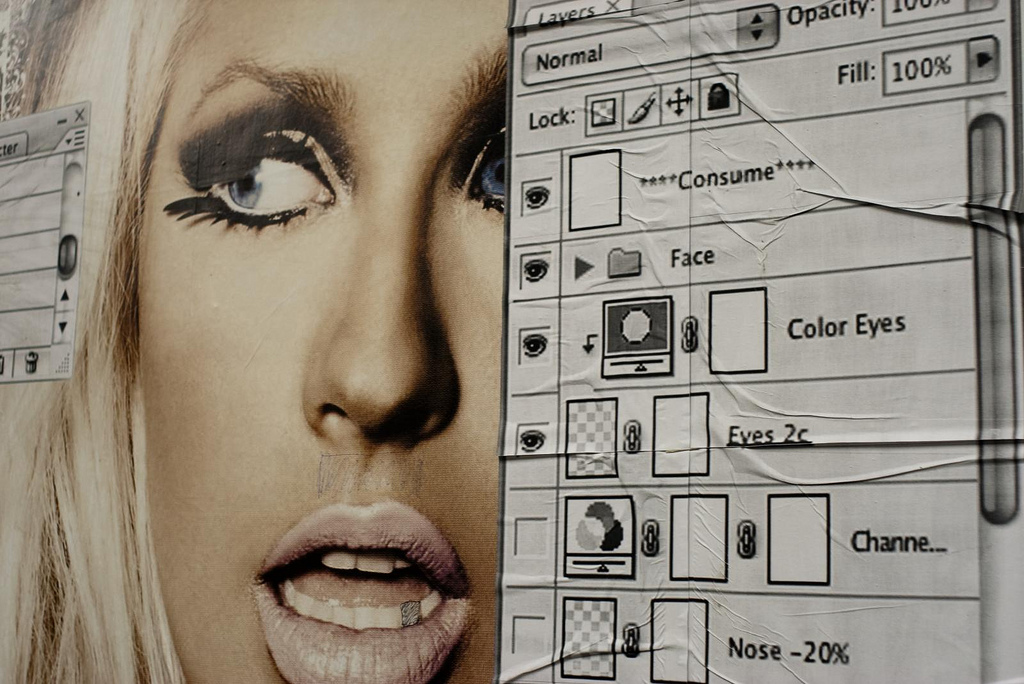 Resistance to this onslaught takes many forms. Stickers in women’s bathrooms that say “You look great today!” or others like the one above which warn of unrealistic beauty standards, are real-life interventions against the corporate beauty standard.

Outdoor subverts can talk back directly to the ad, yet they sometimes have their biggest impact online, for example the ‘Beach Body Ready’ subvertising campaign which went viral in 2015. 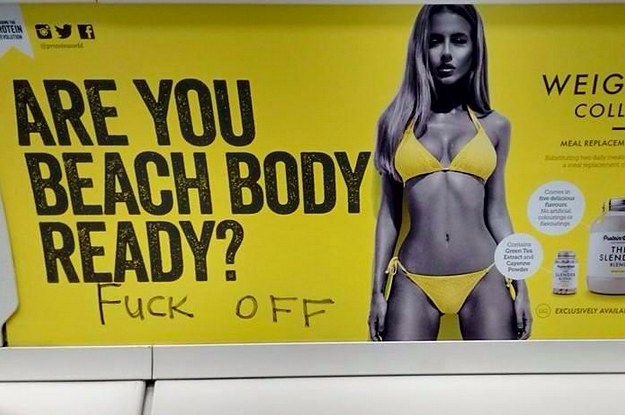 As long as feminists have been criticising the beauty standard, advertisers have been appropriating feminist messages of empowerment and self-acceptance, for instance with the L’Oreal slogan “Because You’re Worth It”, and more recently Dove’s “Campaign for real beauty”.

As feminists and womanists have pointed out, not only does this campaign seem to pit curvy “real women” against thin women (who are apparently ‘fake’?) but the real women pictured are also not particularly diverse. They all appear to be in their early 20s, between sized 12 and 18, white or light-skinned, with straight or wavy hair, no disabilities, and no scars. Dove may have moved the goal-posts a bit, but fundamentally they’re playing the same game: hold up an artificial beauty standard, then offer to sell us soaps and lotions so that we can come closer to meeting it. 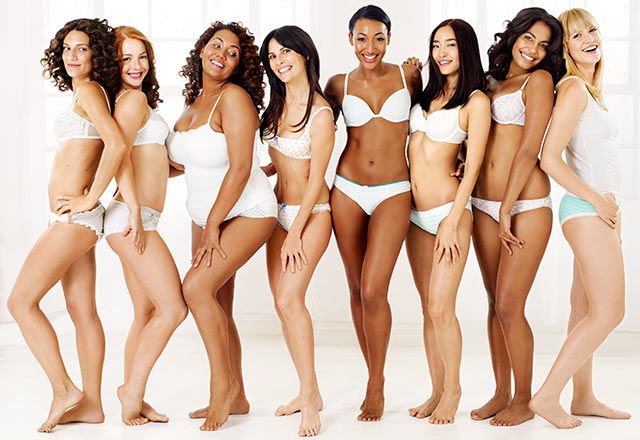 The hypocrisy of the ‘Real Beauty’ campaign goes deeper though: Dove’s parent company, Unilever, is responsible for ‘Fair and Lovely’, the infamous skin lightening cream used mainly in India. The advertising for Fair and Lovely has been criticised for promoting the racist idea that lighter skin is more beautiful and desirable. It doesn’t get much less ‘real’ and empowering than that.

Perhaps one of the most powerful forms of resistance available to us is consciousness-raising, where people talk about experiences and analyse how the beauty standard affects them. Sharing real experiences breaks though the corporate narrative, replacing it with stories and understandings that come from real life. The growing Fat Acceptance movement challenges stereotypes about fat people, and points out that media representations of fat people are often dehumanising and even hateful. Blogs such as The Fat Nutritionist and Red No.3 challenge the stereotypical associations of fatness with poor health and laziness.

Meanwhile, women of colour have pointed out that the advertised beauty standard is often racist, and tied to the legacy of colonialism.

Writers such as bell hooks, Toni Morrison (author of The Bluest Eye) and blogs such as Racialicious look critically at the way race is portrayed in popular culture. The short film ‘Fair or not: the Snow White Complex’ outlines how the western (white) beauty standard has been exported all over the world, sending people of colour the message that their worth as a person is tied to the lightness of their skin. More recently the film Girl Like Me explored similar issues with a heartbreaking scene where little girls asked to choose between two dolls, select the white doll as the ‘good’ one.

Cartoonists such as Alexandra Dal pokes fun at the stereotyped role that is invariably assigned to Black women in advertising. 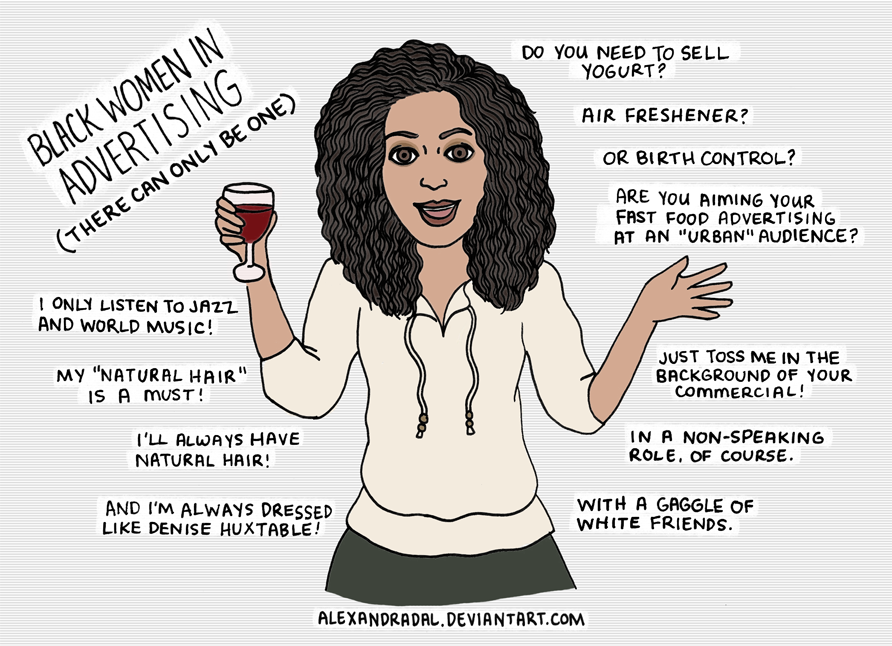 In conclusion, the common message we receive from advertisers is to think that there is only one way to be beautiful, and that we can come closer to measuring up to it if we buy their products. People continue to find creative ways to challenge this top-down understanding of beauty. In a world where we are told that we should all look the same, it’s an act of defiance to find and celebrate the real beauty in those we care about, and in ourselves. 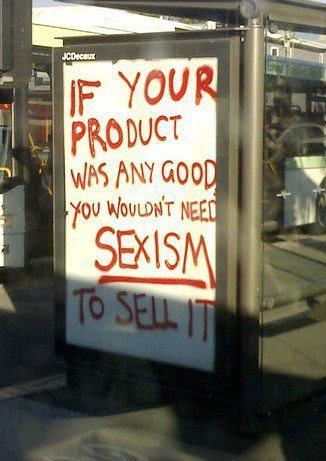