Advertising Shits In Your Head – A (Critical) Book Review, Finally… 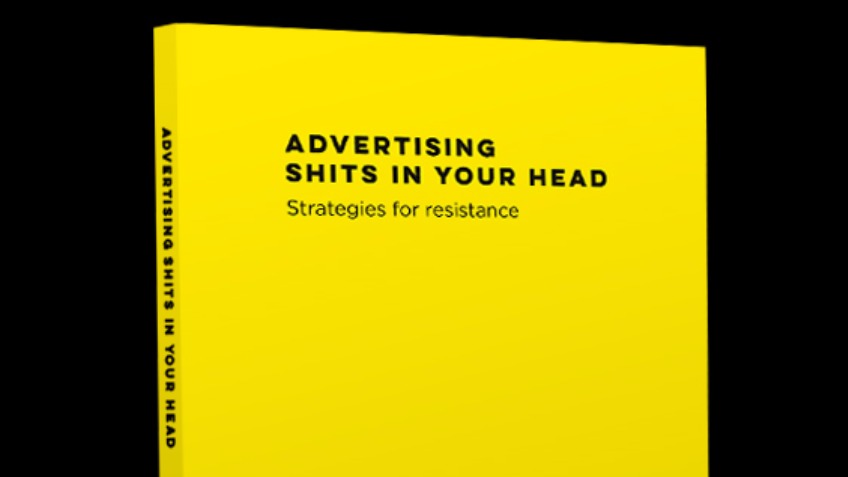 Below is one of the most intriguing, critical reviews of Dog Section Press’ Advertising Shits In Your Head, the recent underground (only 1000 copies printed) publication on the emerging subvertising movement. You can read the words from Graffiti Review below, pulled from their original article entitled ‘Changing The Urban Wallpaper’ which as published in January 2018. Hopefully their analysis of subvertising and the socio-political aspects attached to the practice will inspire you to consider to take over ad spaces in the city where you live (or at least blag your graffiti tagging mates into it, as their throw-ups look well better in illuminated picture frames on the street). We’ve added a couple of extra images to the piece below to articulate the themes of the original article. Enjoy… 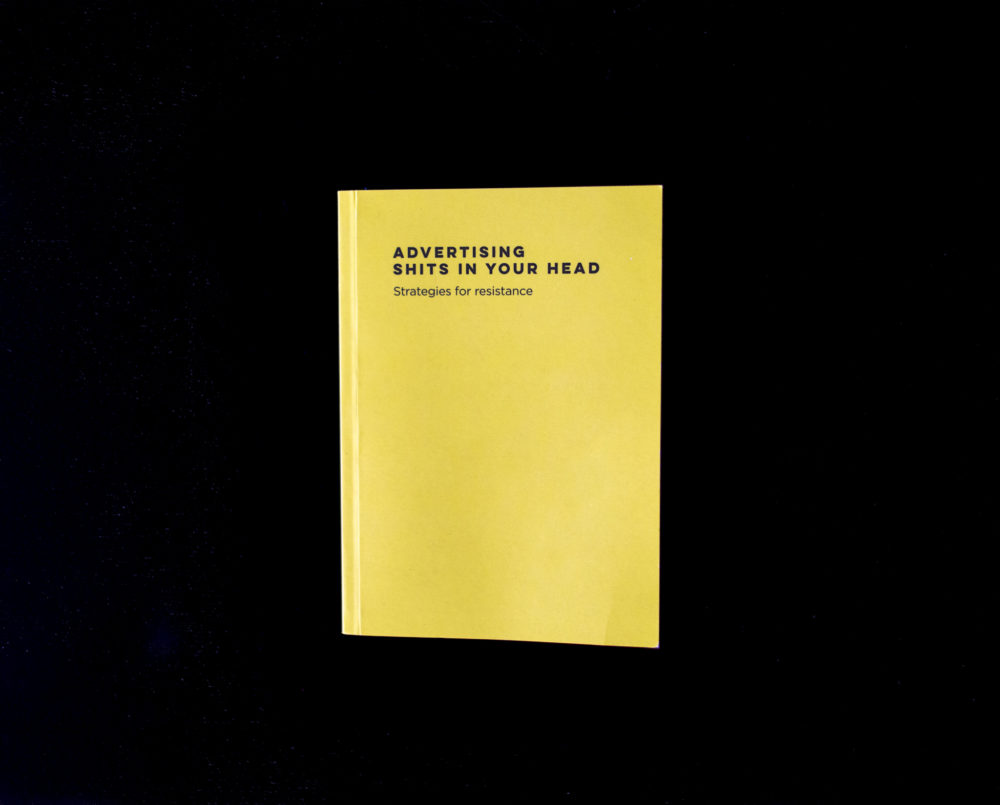 Advertising Shits in Your Head is a new handy pocket guide to modern advertising and, more importantly, how it can be subverted. Published by Dog Section Press just last year it has already run into a second edition. The book’s title was originally used in an article by a certain Bill Posters where he attacks advertisers who surreptitiously “shit in your head”. Expanding on this Advertising Shits in Your Head discusses why advertising should be regarded as such a problem and how it can be tackled effectively. The publishers tell me the book is “intended as a call to arms against the outdoor advertising industry particularly, and capitalism generally. It’s also an exploration of the origins of the modern day, international subvertising movement, and a guide to some of the theory and practice underpinning it.”

The opening chapter argues that advertising is simply propaganda. In the early twentieth century Edward Bernays realised that ‘propaganda’ had developed a bad image and so he rebranded it as ‘public relations’. He believed that for democratic states to function the manipulation of the otherwise ignorant population is a necessity. Propaganda “promotes what he (claimed) to be the civilising influence of capitalism.” Essentially modern advertising is the propaganda machine that supports a globally destructive economic system. As the authors ominously put it “propaganda is, once again, marshalling millions to their deaths.” 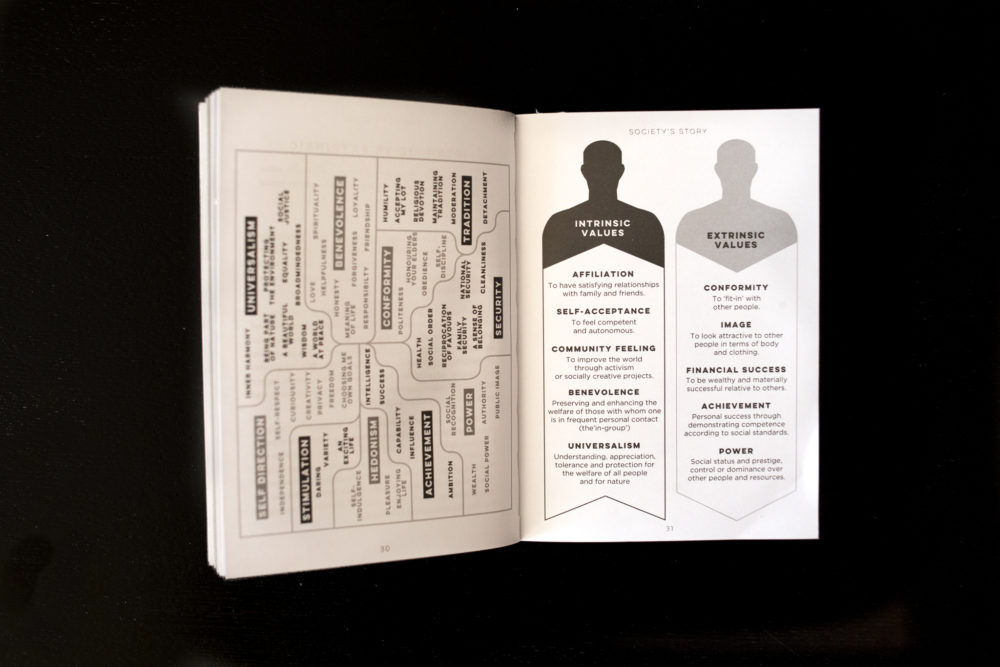 So rather than being concerned about the odd broken window or tagged up shutter it is in fact advertising that needs to be cleaned up. Apparently the average Londoner will see about “3500 commercial messages” per day! Such an overwhelming amount just seems too much to take in. However the book points to research that has shown that public advertising is effective at influencing us subconsciously. Not just in what we buy and consume but even our basic values. Wall-to-wall advertising encourages us to conform and be more selfish, vain, and egotistical. Day-to-day behaviour is changed as an effect of constant exposure to this “urban wallpaper”.

After this theory of why advertising is damaging the guide moves onto the practicalities of how it should be resisted. One way to do this could be a ban on public advertising which has happened in São Paulo and Grenoble. Authorities elsewhere have also limited the amount of advertising that can be put-up and in what format. However the motive for these policies aren’t necessarily benign as public space is utilised just as easily by the state as it is by advertisers. Eg as in the USSR where there weren’t no Coca-Cola adverts but towns were littered with imposing murals and statues around architecture built to project the dominant ideology. The solution is put forward in a DIY guide complete with diagrams. From how to print advert sized posters to what tools are needed to access a desired advertising space. Practical advice is provided and even fashion tips on how to fit in with “the Outdoor Advertising scene”. An important section on the legality of subvertising is also included. The best way to avoid attracting unwanted attention is to simply go unnoticed by looking like just another worker in hi-viz going about their job. However the law is a bit hazy and has been deliberately tested. Some subvertisers see what they’re doing as acts of civil disobedience and have allowed themselves to be arrested. In one case a French judge even declared the activity to be legal and in the public’s interest!

The final section of the book has several examples of successful subvertising campaigns. From anti-voting posters, a Parisian wide take-over against the COP 21 climate conference, a campaign to counter the Met police’s propaganda, to free lessons in subvertising for the public. There’s plenty of pictures and illustrations too. Some of the content veers from counter-propaganda, to conceptual pieces, and some more street-arty stuff. Up ‘till now I haven’t really mentioned how the book relates more widely to street-art or even graffiti. A lot of the theory in Advertising Shits in Your Head can comfortably accommodate other forms of, for want of a better word, urban-art. At one point the brandal Jordan Seiler describes a utopian vision of “public messaging and scrawl on the streets.” And so, although the book doesn’t contain any conventional graffiti, I think the subject is directly relatable. In fact graffiti is often referenced in opposition to modern advertising. Why is one acceptable, wrapped over public transport, but not the other? If graffiti is ‘visual pollution’ then why does the visual white noise of advertising not provoke a similar response? In fact the case against advertising is a bottom-up inversion of ‘Broken Windows’ theory; “Removing, replacing, and defacing advertising is not vandalism. It is an act of tidying up that is both legally and morally defensible.” I questioned the editor of the book on how subvertising relates to other forms of urban-art; “I’m not sure if subvertising should be considered street art, or something else entirely – it is art in the street, it shares that similarity. But I think the rise of subvertising might be intrinsically linked to the decline of street art. I think a common thread for some of the subvertisers featured in the book is a weariness with the street art world, which is more and more commercialised and co-opted. Subvertising gives them a way to go on the attack again.” 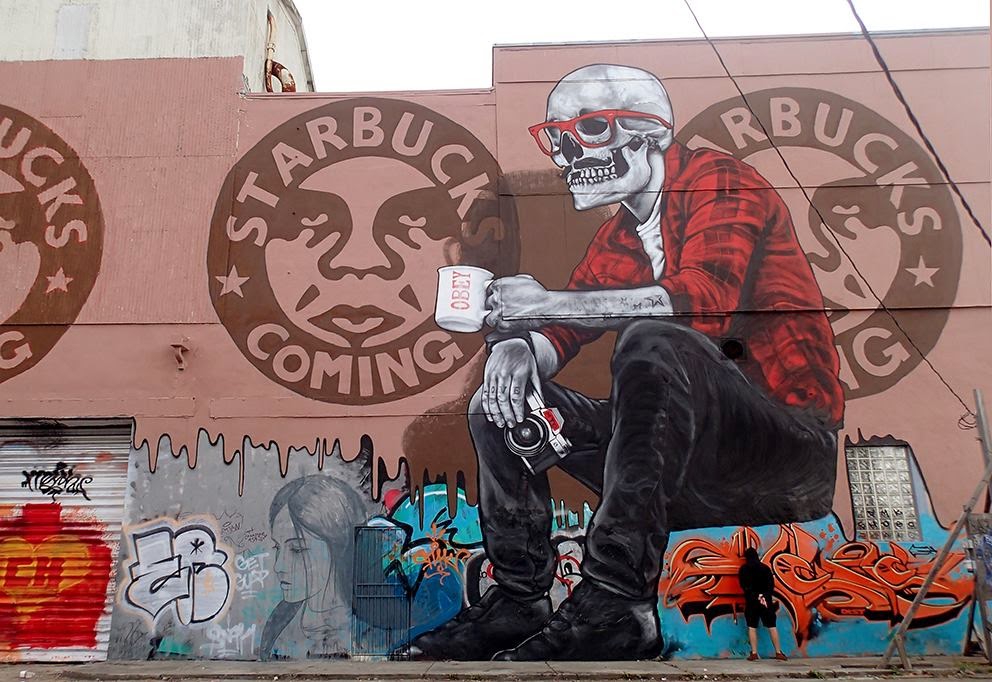 This had me thinking about how the art-gallery has moved into the streets through the street-art phenomenon. While this may mean walls are more colourful, street-art has also become synonymous with gentrification and often represents how little control people have over the places they live. Who would choose to live in a museum anyway? A sterile space taken up by this-or-that international street-artist to impose themselves 50ft high on a city they don’t live in. Their work is gawped at by tourists with smartphones while residents pass-by without a glance. Subvertising is obviously about taking back control from advertisers but, by extension, the idea applies to all aspects of visual culture. This is where graffiti differs to street-art as, undoubtedly narcissistic as it can be, it too is about taking back control. That scrappy (un-curated) tag is my frustrated little ‘fuck you!’ So graffiti, like brandalism, is political because it subverts urban space in an age of mass surveillance and cities designed through concepts such as CPTED. Without being organised by any institution it’s a collective expression of a place. In her book, Civilizing Rituals, Carol Duncan conflates advertising with the modern art museum. She argues that “what modern museum culture excels at is the construction of a ritual self that finds meaning and identity not in relation to history, community, or questions of morality but by renouncing such concerns and seeking after something or someplace beyond… that can be entered only individually.” This is the same individual mentioned earlier who’s moulded by advertising. There’s a commercial and cultural objective linking the street-art museum and advertising that activities like subvertising or graffiti can disrupt.

Subvertising Timeline – From Detournement to The Present Day: 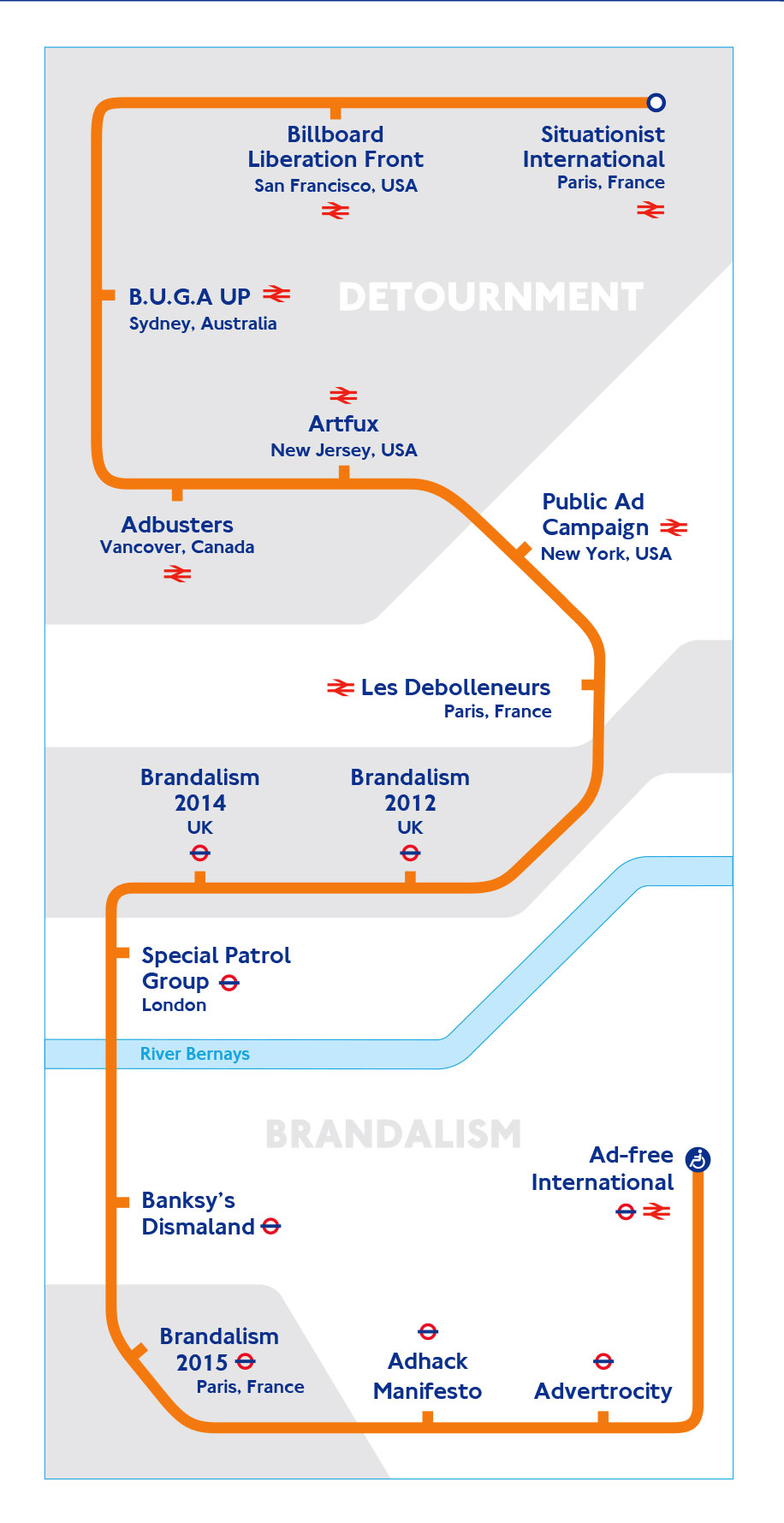 While Advertising Shits in Your Head is meant to be a guide to advertising, and how it can be subverted, taken beyond that it’s a manifesto on how urban spaces can be reappropriate and reoccupied by the people who inhabit them. The whole book is underpinned by the idea that “the freedom to make and remake our cities and ourselves is… one of the most precious yet most neglected of our human rights.” The streets aren’t an extended gallery of elitist art to be respectfully observed; they should be interacted with. Advertising Shits in Your Head successfully puts the case against the massively negative influence of advertising. Not just an academic argument there are also plenty of examples of subvertising in action. More than that the book helps anyone who reads it to go out and put the theory into practice themselves.