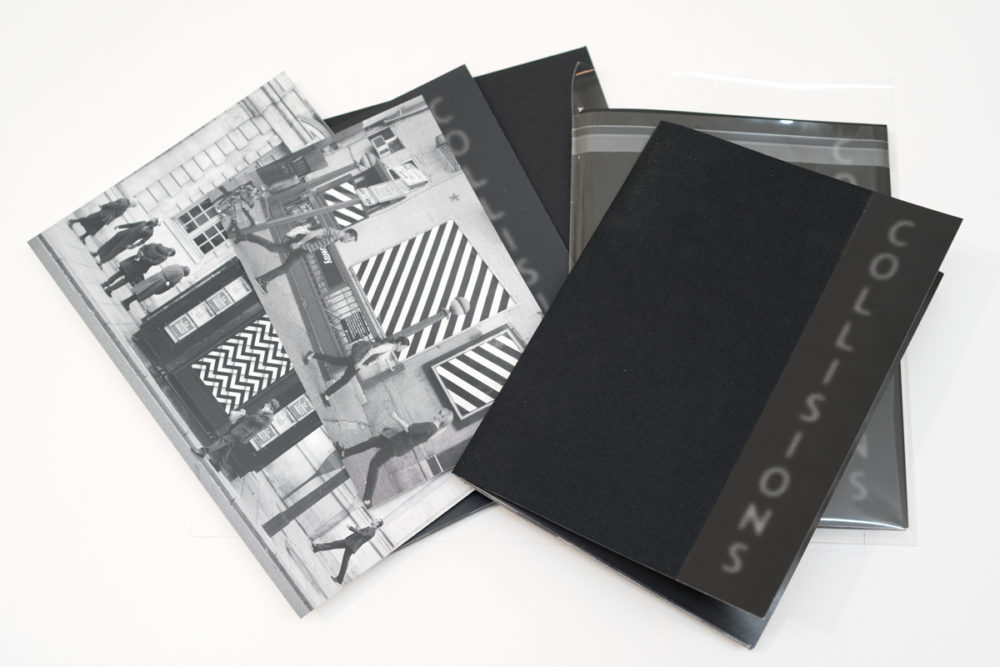 Our good friend Jordan Seiler has released his eagerly anticipated zine that delves into a selection of his international interventions that form a solid global survey of his ‘Collisions’ series.

Here are some words from Jordan about a deeply personal project which is both political and artistic in its subversive nature followed by one of the zine’s written pieces by Thomas Dekeyser.

‘One of my ongoing personal projects these past few years has been the Collisions series. These photos document simple graphic BW patterns illegally installed into outdoor advertising around the world. On the street, the patterns are intended to grab a viewers attention with an image that has little reference to advertising and is hard to interpret as anything other than an interruption. I am interested in viewers thinking about the act of disobedience, the space around the advertisement, the frame that holds it. I want to create a small amount of room for radical imaginaries to blossom and allow utopian visions to tumble out of simple disruptions of reality.’

“In elaborating and image of the future, utopian thought also generates a viewpoint from which the present becomes open to critique.”

‘I choose the Collisions locations very carefully to create strong, well balanced photographs of the city. I want viewers of the photographs to be able to come back to the imagery over and over again.  I want them to be meditative and an opportunity for believers to renew their belief. 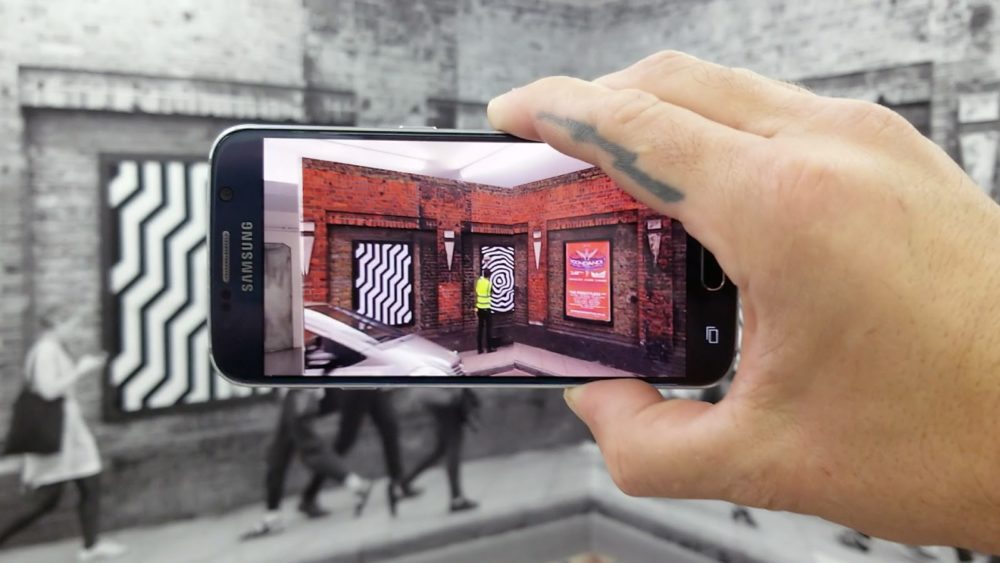 For those that only see the documentation, the images can be anemic. Proof of the politics that took place on the street isn’t immediately recognisable. But hidden within the image itself is a digital video of the street installation viewable through an augmented reality mobile app. In this way the photographs take their creative politics with them wherever they go, and for me remain charged objects.

Last year I decided to take the first 15 images from the Collisions series and put them in a small Zine/Booklet. It is a beautiful little signed edition of 400. Three essays by Jeff Ferrell, Thomas Dekeyser, and Carlo McCormick give the imagery unique context and insight. Their thoughts give credence to the idea that our role as individuals is to push on the margins and expand our collective understanding of the world around us.’

With an almost hypnotic quality, Jordan Seiler’s confident symmetries and order stand stark against the chaos of urban life. They draw me into the world of incessant repetition I am so used to: visit this, dream that, share these, buy those, visit this, dream that, share these, buy those, and so on, and so on. Repeated over and over again, but fundamentally colourless. We are left with a sense of numbness, a certain incapacity to dream wildly, at night, without first passing through the frames of advertising space. They are evoking stories and passions I can’t quite trace back. The source has become so all-encompassing, so omnipresent that its contours have blurred to the point of invisibility. 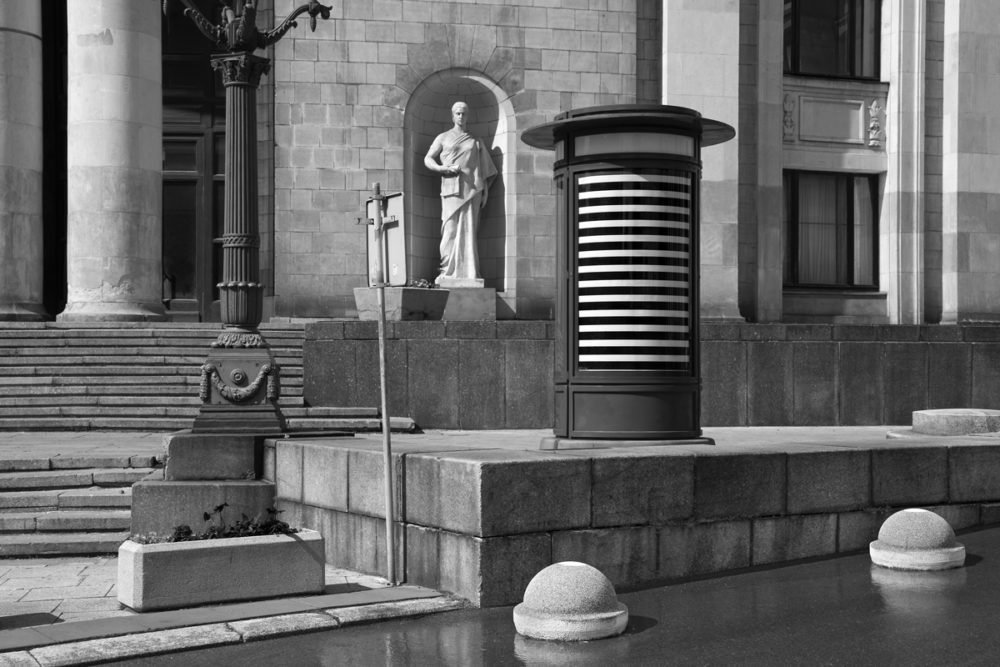 In effect, outdoor advertising is part of that realm deemed non-political by most. They seem to forget that those who determine the functions, organisation and access of space, are conducting an essential form of governance. Through the careful management of access, outdoor advertising is in the business of obliterating traces of other forms of life. Jordan Seiler’s artworks shake up the routine, and definitive existence of that space and the processes that make it up. The works expose space’s hidden dependence on social, material and legal productions, that is, its hidden constructedness. Absence, here, is all but a void: in making-absent advertising, he is underscoring its given (omni)presence. With their abstract compositions, this materialised void takes up a space held at maximum distance of advertising aesthetic, without collapsing into the mundanity of a poster-less advertising space. The empty ad is a sight we are too deeply and unconsciously accustomed to, a commonplace sight in the commodity circuits of the outdoor advertising industry that is too much part of the advertising machine and its temporary incapacities to sell media space. A solid black or white poster would, as a result, fail to catch the attention of passers-by. Jordan Seiler’s work, by contrast, functions as an anonymous circuit breaker. The advertising space is no longer an advertising space.

But more than a demand to not take for granted the streets, Jordan Seiler’s works disrupt the ways in which our bodies fit their assumed functions in relation to those streets. The initial effect is dis-identification: an encounter with his work questions and troubles taken-for-granted urban identities and habits. It undoes them to cause a sudden distancing from the immediate situation. But it does this in a very personal way: we are directly confronted with our own conforming to ascribed identities, the sleeping of our bodies, our incapacity to think and act beyond the shackles of urban governance. Jordan Seiler understands that, to build a new world, we need to rebuild ourselves and our existing relations to the world. Towards that rebuilding, what he is offering is a pause that directs us towards our own feelings, thoughts and relations.

Despite the binary aesthetic of his installations, Jordan Seiler’s vision is by no means constructed through simple dichotomies of us/them or good/evil. By not mimicking advertising aesthetics, let alone the visual language of a particular brand (as is the case with culture jamming inspired subvertising), he is less concerned with critiquing the most despicable of advertisers, and more with expressing itself in the ethos of a more generalised questioning, one that addresses us not them. 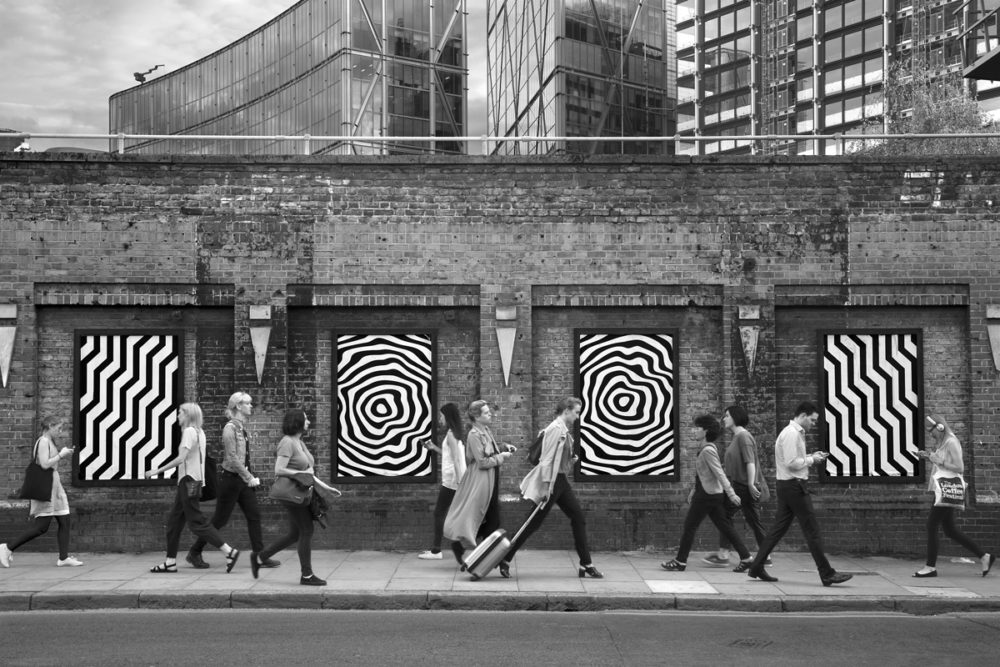 In this sense, I like to think of Jordan Seiler’s work as closer to sabotage than to propaganda. He is unwilling to make the advertiser’s mistake. His is not a grasp for power and monologue, but for dialogue and encounter. Unlike the advertiser’s, his works are wrapped in a beautiful modesty: they refuse any claims of knowing what shape or form others’ desires should take. He replaces the creation of desire with the desire for creation: a symbolic transformation in which all are to partake. This focus on collective emancipation and empowerment arises not out of an incapacity to imagine alternative futures, but from a strong belief in a simple premise: that potential futures will and must arise out of our collaborative endeavours, not from the mind of a singular author. The future of our cities must be held in the hands of us all. This is why he appears so careful to withdraw from sketching out utopian ideals of an advertising-free city. His works, it seems to me, want to trigger the acceleration of the spontaneous proliferation of texts in our cities, beyond the monopoly of commercial speech, rather than slowing them down into a mute city. He is not concerned with formulating a prototype for future uses of the city, a new urban order, and more with creating breathing space out of which alternatives to emerge. He is creating temporary spaces of non-communication out of which, he hopes, permanent circuits of communication might emerge. The latter will form the energetic charge for a renewed collective imagination.

His dreams appear by no means limited to rhetorical persuasion towards rational thought in the sense that Habermas would have loved to see it. The works are more concerned with destabilisation than with any rational debate. His are triggers for deeply embodied action, for wild fantasies, for the acceleration of an impassioned urban life, one overwhelmed by an excess of chance encounters, for an urban space with which we develop an ever-deepening relation. But, as is common to posters in ad spaces, these calls more often that not remain unheard. What happens when Jordan Seiler’s, and other subvertisers’, disruptions become part of our urban anticipation, performing little less than the reproduction of an expected aesthetic? This is a threat amplified by the aesthetic embeddedness of Seiler’s works. The rhythms and directions of their sharp shapes often blend into the background seamlessly. In those instances, they fail to break the protective film of urban bodies. As one critic wrote, ‘Subvertising at its best is like a skip on a record that the needle passes over with a minor interruption’. The work intervenes only temporarily, and through this, it unavoidably holds within it the premise of urban life circling back to its normal state.

And by throwing up exciting art, is it not also rendering the mundane spaces of outdoor advertising sacred again? Outdoor advertising becomes a potential site of art and excitement; something to look out for during walks through the city. I can imagine the CEO of an outdoor advertising company secretly smiling at yet another of Jordan Seiler’s interventions. The CEO knows the world is excited by Jordan Seiler’s work, and by extension, by the spaces that hold them, which in turn garner renewed attention. Finally, they are receiving the desired fetish status the CEO so long sought for – a dream materialised in one of Jordan Seiler’s cinematic images framed carefully amidst the sleekness of a top-floor boardroom.

But to stop at that dreary sight would be to offer a premature ending and to dismiss the temporarily extensive character of Jordan Seiler’s artwork. Knit together, each and every of the installations produce a collective charge capable of facilitating a gentle push for others to pick-up and proliferate. In my mind, the fight Jordan Seiler is battling was never about advertising per se. It was always about the true promise the amplification of social exchange and encounter holds for tangling new realities, beyond the monopoly of corporate urban advertising, surely, but more importantly, beyond the impasse of our impoverished present times of social, mental and environmental decline. In this sense, it operates in resonance with others for whom the profitable fragmentation of the world is not the end, with those refusing to be constantly reduced to urban ‘consumers’, with those preferring acting to being acted upon. Because this is not necessarily about a shared practice but about a common idea of life, these actors largely exceed the field of subvertising. Here my hope knows no limits. To use the words of the anarchist collective Tiqqun, together with a diverse set of practices all over the world, Jordan Seiler shows ‘that we can organise ourselves, and that this capacity is fundamentally joyful.’ They are, then, not fuelled by a melancholic attempt at saving a drowning world. They are driven by the joy of producing the conditions for a novel, unprecedented world.

Get a copy of this first Collisions Zine here.