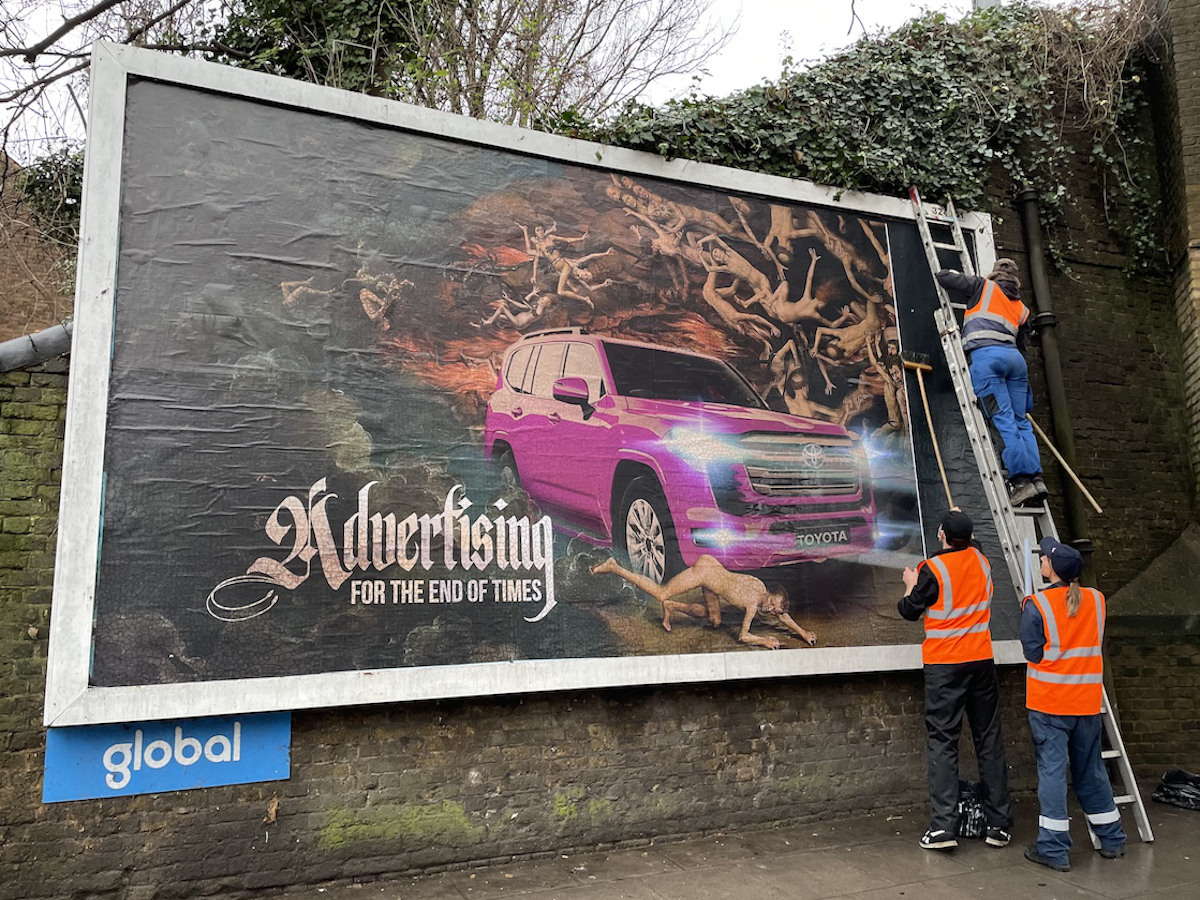 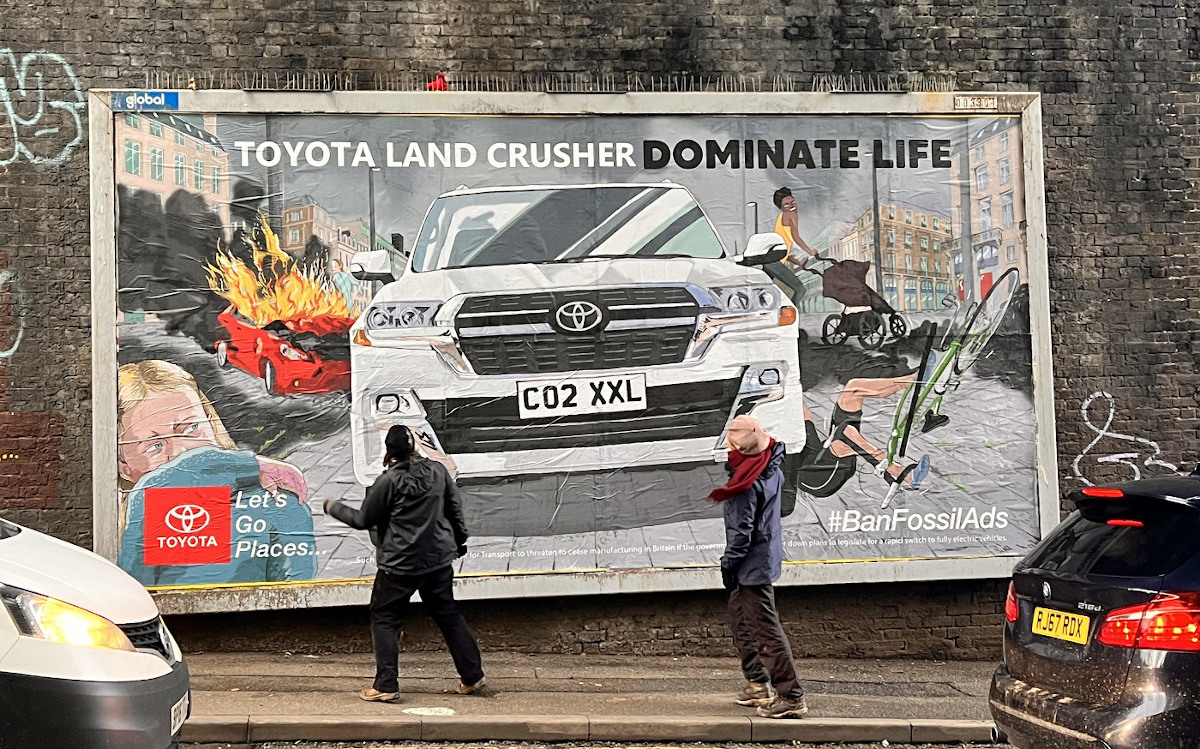 Over 400 advertising billboards and bus stops in Belgium, France, Germany and England have been hijacked by climate activists this weekend calling out Toyota and BMW as the European Motor Show in Brussels opens its doors on its 100th anniversary.

The hijacked billboards across Europe highlight the misleading adverts and aggressive lobbying tactics used by Toyota and BMW. In 2022, Toyota was ranked the 10th worst company in the world by InfluenceMap for their anti-climate lobbying, the worst ranking for any car manufacturer, followed by BMW who ranked 16th overall. [1] 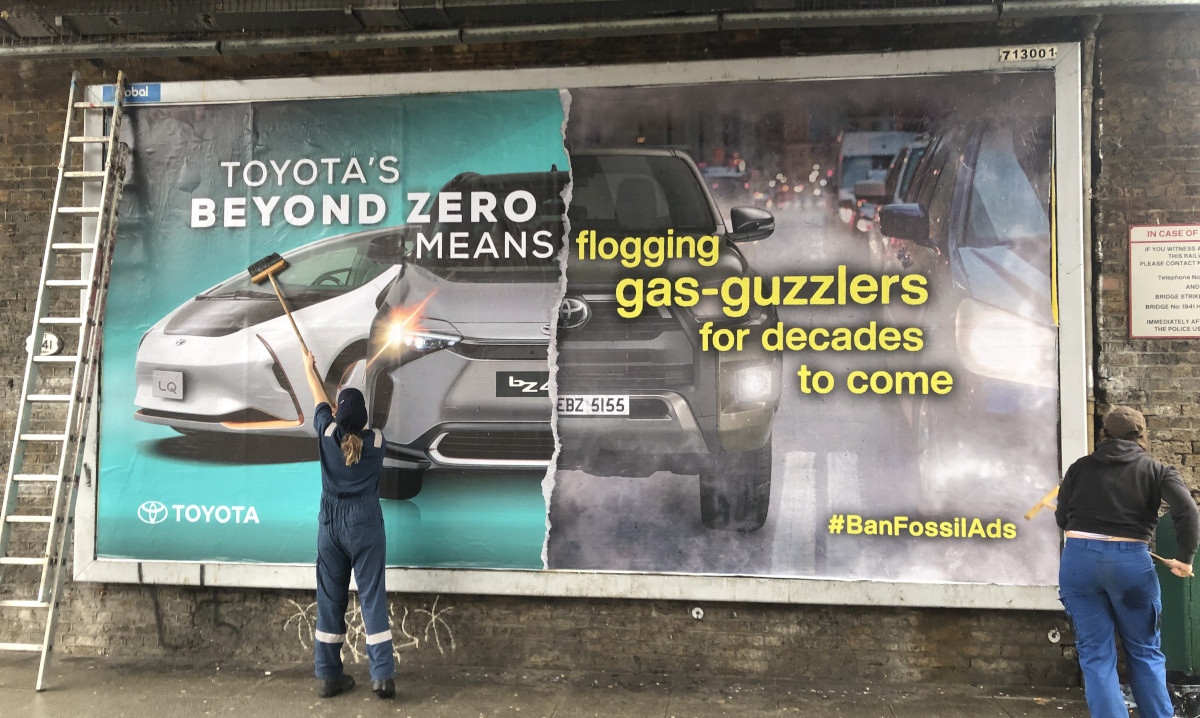 Despite Toyota and BMW advertisements emphasising their Electric Vehicle (EV) range, both manufacturers are still heavily invested in selling polluting combustion engine vehicles. [2] In 2021, just 0.2% of cars sold by Toyota were EVs [3] 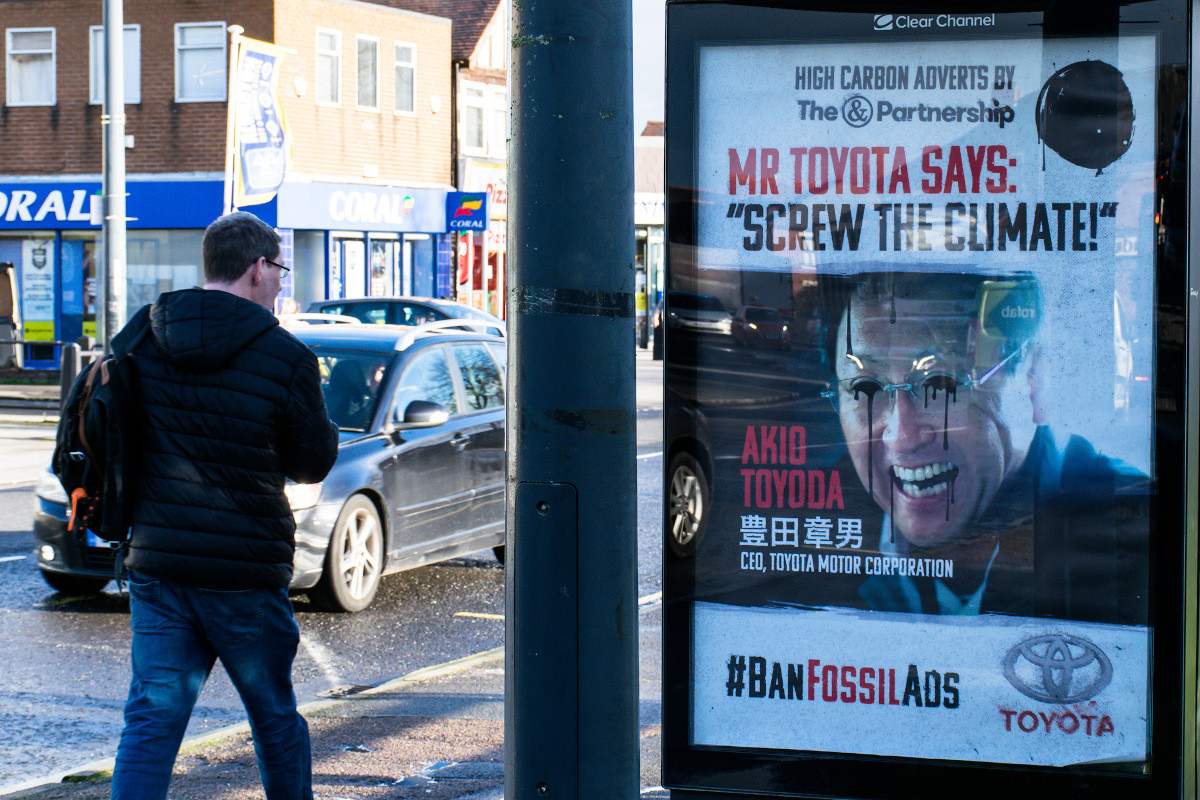 This Europe-wide action comes at a time of growing international momentum behind the idea of introducing tobacco-style advertising bans on climate-wrecking products, such as fossil fuels and SUVs. Towns, cities and even whole countries have introduced advertising bans on environmental grounds, while a recent report from a UN High-Level Expert Group has called for the introduction of regulatory requirements to help businesses reach net zero, rather than voluntary measures, in order to avoid misleading environmental claims and limit lobbying activities. [4]

The posters appearing across Europe were designed by artists including Lindsay Grime, Michelle Tylicki, Merny Wernz, Fokawolf, Matt Bonner and Darren Cullen. They feature images of highly polluting Toyota and BMW vehicles such as the Toyota Land Cruiser and the BMW X5 and X7 SUV. One artwork has a Toyota Landcruiser driving through urban streets as pram-pushing pedestrians, children and cyclists rush to get out of the way. Another mock BMW advert has “Add Climate Breakdown” in parody reference to a real BMW advert that reads “Add Driving Pleasure”, as seen at Brussels Midi train station in recent weeks. 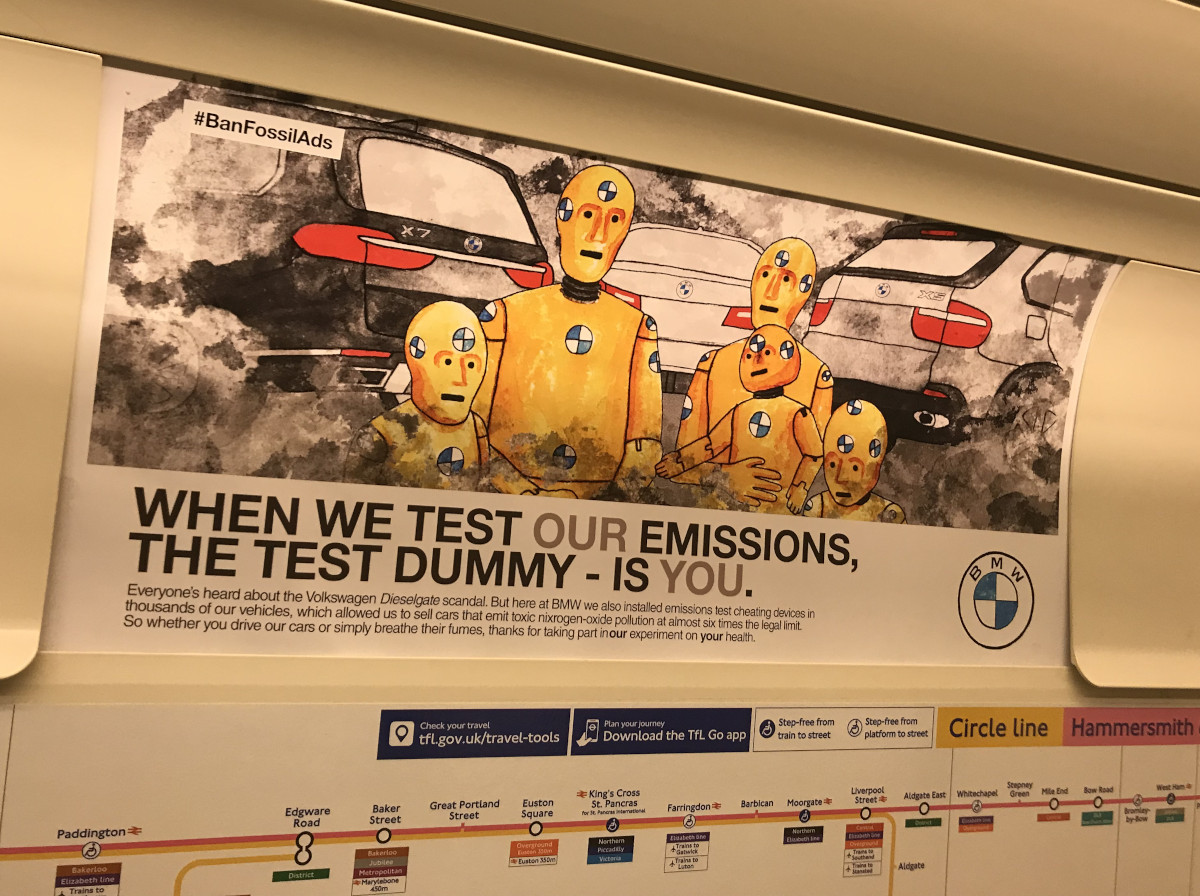 “Toyota have pushed their ‘Beyond Zero’ sustainability adverts whilst lobbying governments around the world to weaken air quality plans and threatening legal action to protect their profits over a liveable climate. Their adverts are duplicitous.”

Ahead of the ban on sales of petrol and diesel cars by 2030 and hybrid vehicles by 2035 in the UK, campaigners are calling for an immediate end to advertising for the most polluting vehicles, especially SUVs. Campaigners from Adfree Cities (UK), Badvertising  (UK), Résistance à l’Agression Publicitaire (France), Climáximo (Portugal), Greenpeace International and 35 other organisations and are calling for tobacco-style legislation to end adverts for high carbon products.

“Toyota and BMW use slick marketing campaigns to promote over-sized SUV models that clog up urban neighbourhoods. Electric SUVs are no solution – they’re too big for most parking spaces and their tall bumper size and excessive weight present an increased risk to pedestrians, especially children, involved in road collisions.” 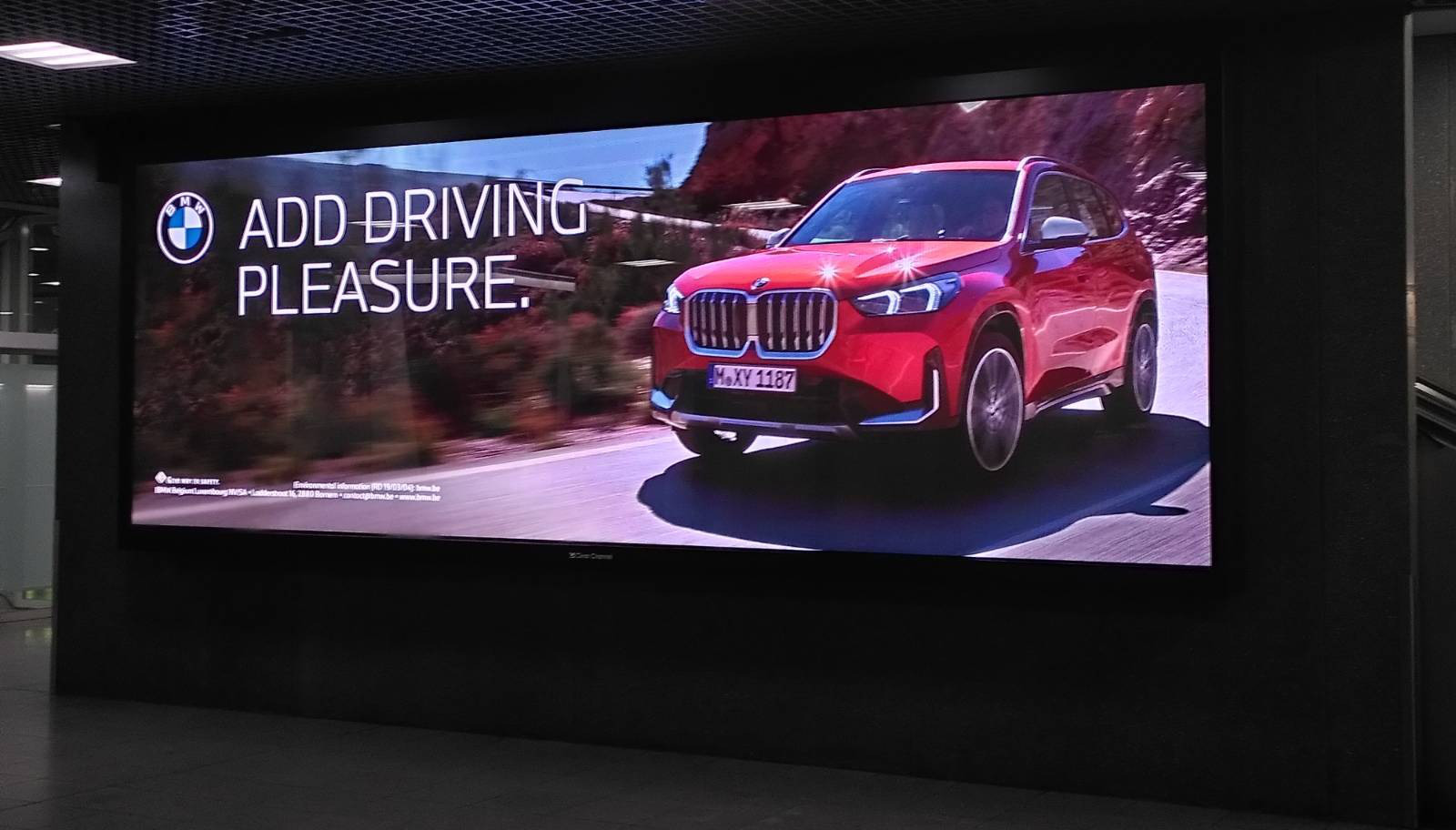 Above: a BMW advert spotted in Brussels-Midi train station, December 2022 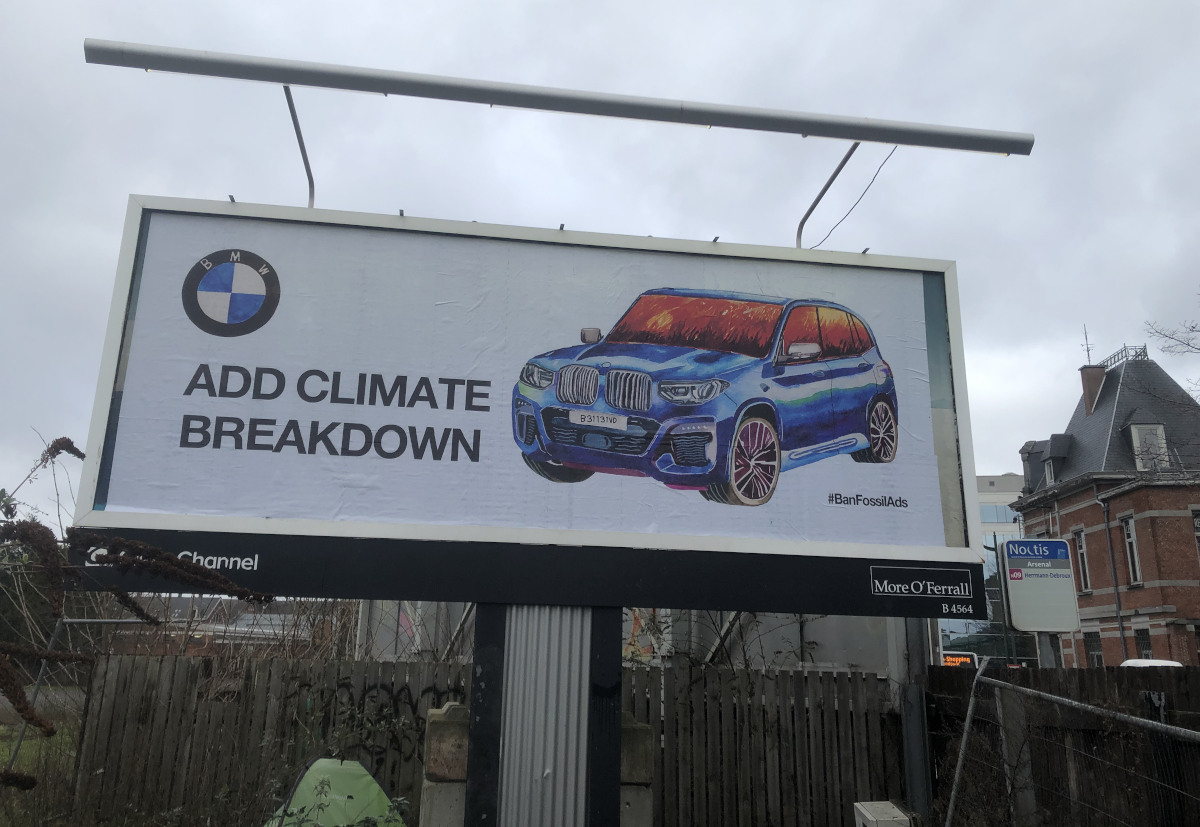 Above: a parody BMW subvert installed in Brussels, January 2023

[2] Toyota’s ad agency is The&Partnership https://theandpartnership.com and Dentsu is one of BMW’s ad agency https://www.dentsu.com/nl/en

Brandalism is an international collective of artists and activists that confront the power of big business and their public relations advertising. They use ‘subvertising’, the art of subverting advertising, to counter greenwash by major polluters. http://brandalism.ch/

The Subvertisers’ International is a network of counter-advertising groups in Europe, USA, Argentina and Australia. https://subvertisers-international.net/about/members/

Extinction Rebellion (XR) is an international movement that uses non-violent direct action to persuade governments to act on the Climate and Ecological Emergency. https://www.extinctionrebellion.be/en