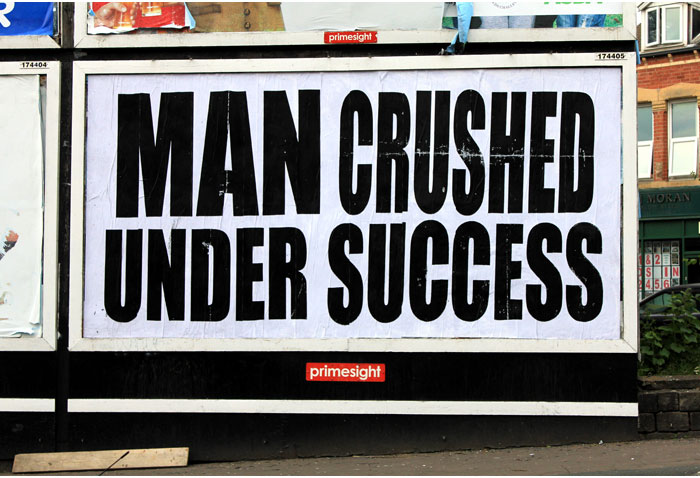 If we look at the statistics for 2011, we can see how much of our culture is influenced by advertising – 100% of television revenue comes from advertising, 100% of radio funding, 80% of our newspapers and around 50% of our magazines are funded by advertising revenues. Sponsorship by commercial companies underwrites most of our cultural institutions and public services including our museums, galleries, transport networks and universities. This subsidization of public institutions and services can be beneficial however it means that a large amount of our cultural spaces and places are controlled by large multinational corporations because they control the flow of money and with this power they get to say who says what, where. This leaves little democratic control and influence in the hands of the public.

So if we want to understand the messages that define our culture, we must look at the main storytellers and in western culture, they are the ones with the most money. In 2011, £16.1 billion pounds was spent on advertising in the UK. Globally it was $506.3 billion. All this money is spent on interrupting us and influencing our behaviour. 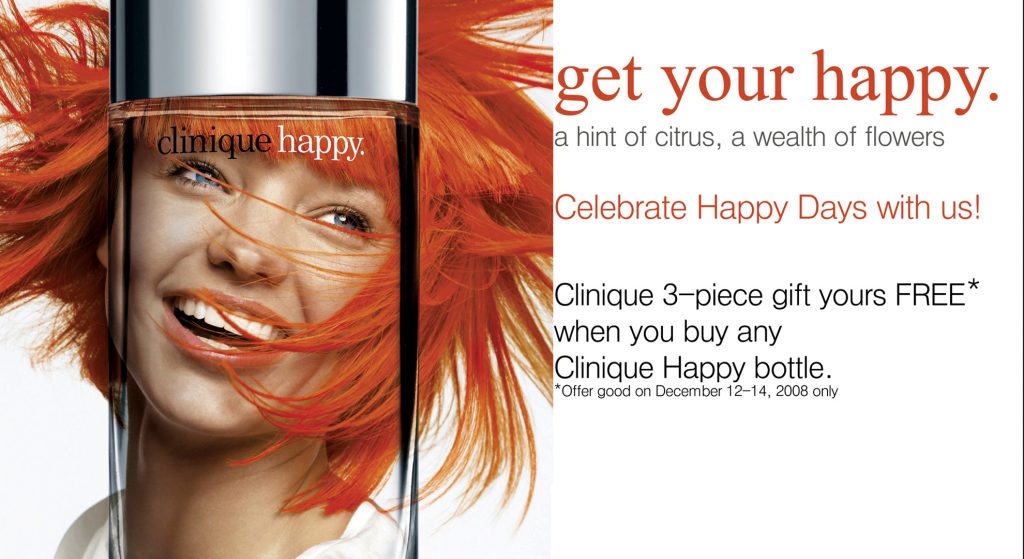 Clinique Ad // ‘Get your happy’

On average we are exposed to 3500 commercial ‘impressions’ a day – brand logos and images on products, in shops, on vehicles, billboards, bus stops, street furniture, television, internet, radio, print newspapers and magazines. The commercial messages that we see 1000’s of times a day are mainly centered around happiness – buying things will make you happy, whether you are male, female, young or old, we are told constantly that happiness can be obtained through acts of consumption. 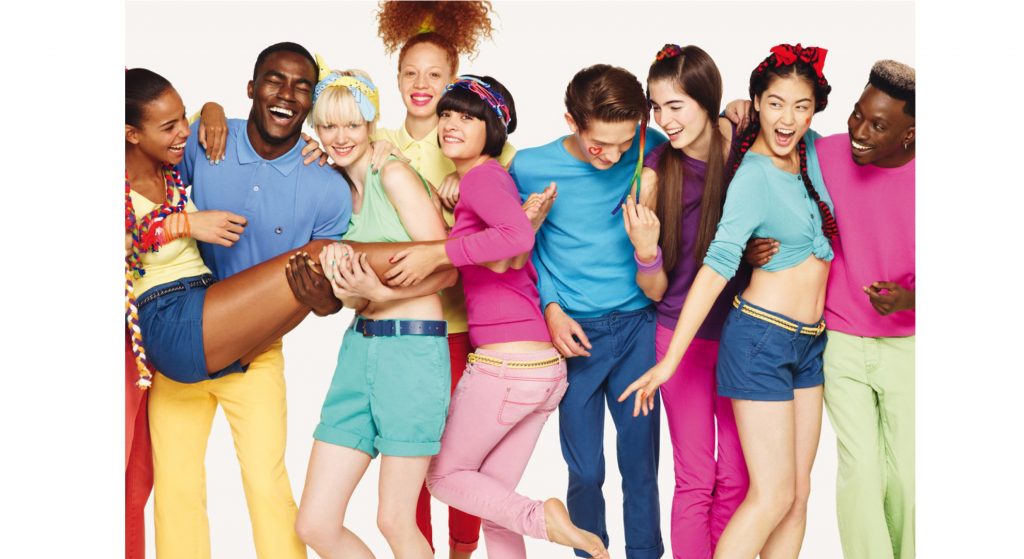 Benetton Ad // Everybody has an intimate need to belong…

The reason why advertising and commercial images are so powerful and influential is because they take universal human needs and skillfully connect them to objects. We all want intimacy, meaningful friendships, love, sexuality, confidence, independence, control and an exciting social life and advertising points the way to it thousands of times a day.

The advertising agencies and public relations companies do this with what the literary critic Northrop Frye refers to as ‘a judicious mix of flattery and threats’ or what the british street artist Banksy refers to as ‘a rock thrown at your head’. Unfortunately our entire economic system exploits our desire to succeed and belong by promising us fulfillment through acts of consumption. This is why o2 says ‘we’re better connected’, why L’oreal says ‘because I’m worth it’, and why Burger King says ‘have it your way’. 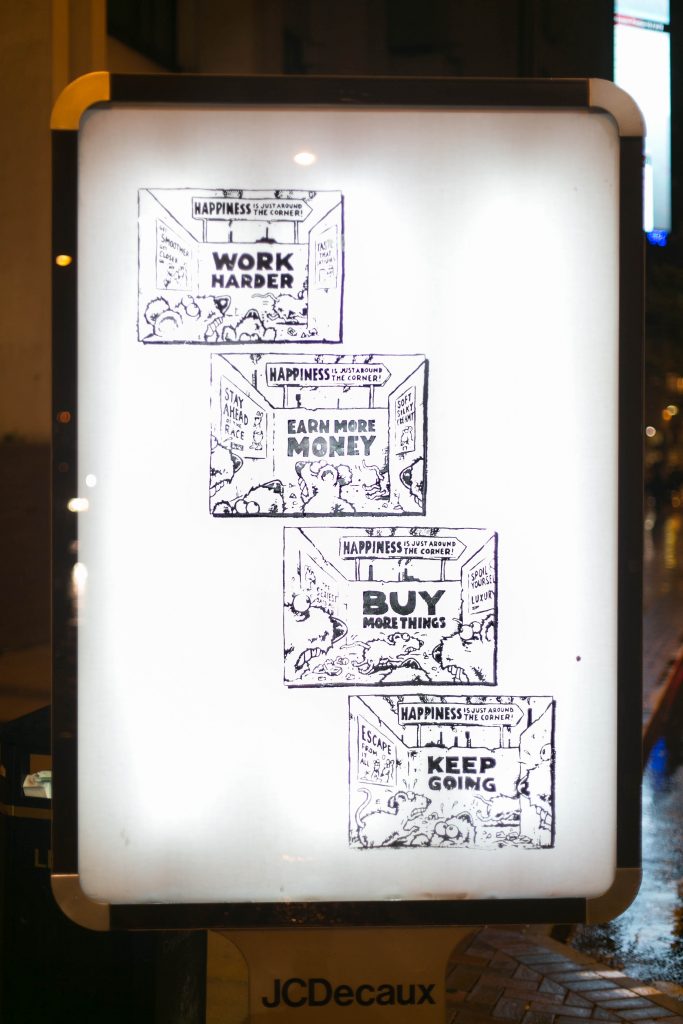 We must be aware of the fact that the goal of most national economies is to achieve unlimited growth of their GDP through the continuing accumulation of material goods and expansion of services. Since human needs are finite, but human greed is not, economic growth is maintained through the artificial creation of needs through advertising.
As we all struggle to find our place in this world, our identity as unique humans, this is what our economic system exploits. Sure it produces things we can’t do without, however by definition it can’t produce true happiness. Buying things cannot make us happy, if it did retail therapy would actually work. However it only provides us satisfaction for a little while, not true happiness. With so many advertisements everywhere we wanted to know how do they affect our values, societies values? Our shared judgements of what is important in life. 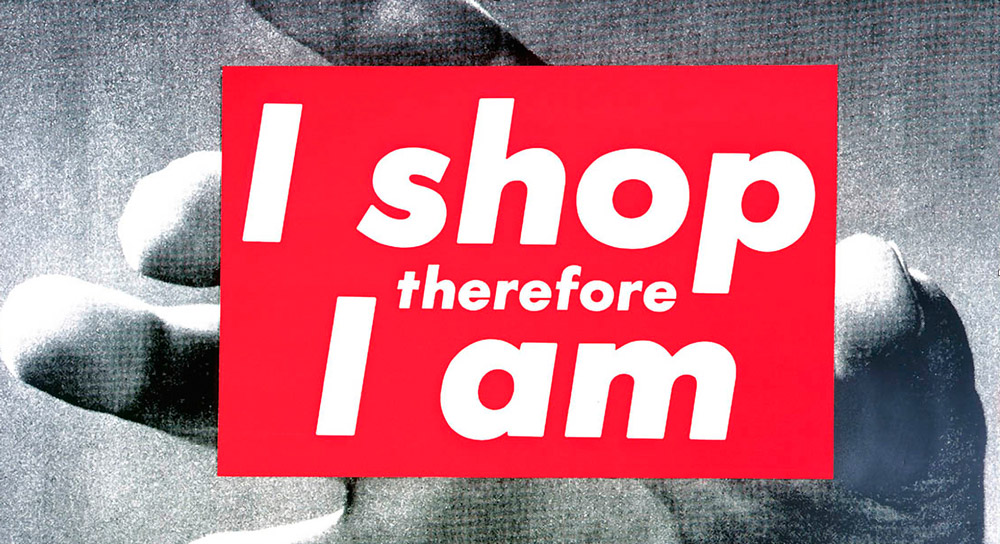 The image above is by the world renowned artist Barbara Kruger created in 1987. However it is only in the last couple of years that research being conducted by psychologists is revealing what some have known for a long time. Studies are revealing that advertisements reinforce the values that they reflect – advertising doesn’t just reflect culture, it actively shapes it.

For decades the advertising industry has stated that they just reflect the needs of the public. They just give people what they want right? Wrong. All these messages that we are exposed to about social status, material wealth, power, success and individual needs pervade every part of our daily lives and as a result, psychologists in the US and UK are finding that this pervasiveness of advertising (the huge quantities that we see daily) normalizes behaviours and attitudes and most importantly values.

This is because advertising normalises what it endorses – we see it all around us, it is primed in our environments all the time so we think that constant consumption is alright because it is normal – it is conventional. However new research is also showing that the more emphasis we put on the cultivation of the self – our individual identities, needs and desires, our interest in positive social and environmental behaviour is undermined. The images, values and the ideas of advertising are lodged inside us. To not be influenced by advertising is to live outside of culture. We are not born with our values; they are embedded and normalised by the messages we receive from our social environment.

A recent memory that is burned into the minds of the British public is the UK riots in August 2011. These were very unusual riots as the world saw British young people – most aged under 24, take to the streets in what initially started as a protest against the murder of a young man in London by the police. 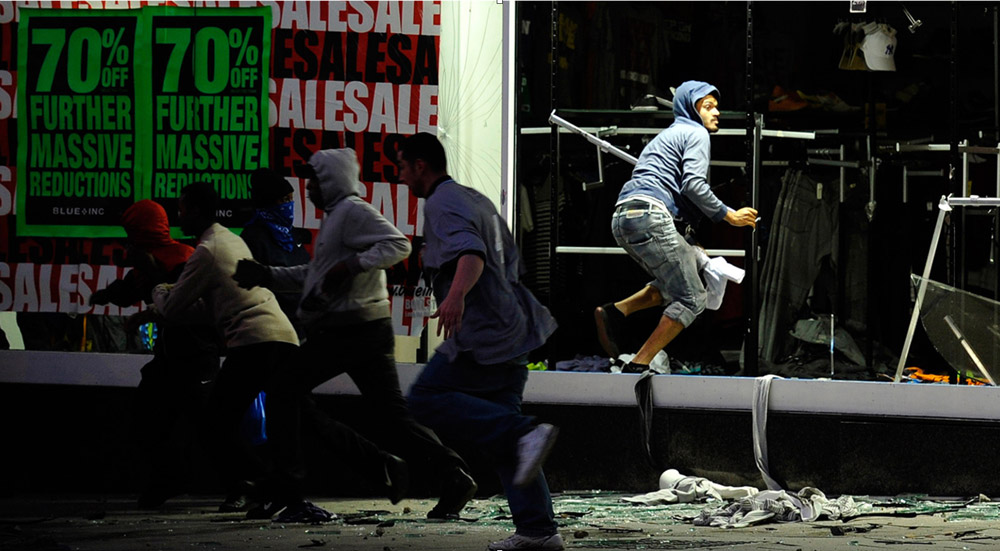 However this unrest quickly turned into something quite different. It became a nationwide looting spree as young people took the opportunity they needed to steal the fashionable products that they had been told they needed, 1000s of times a day, in order to be normal. 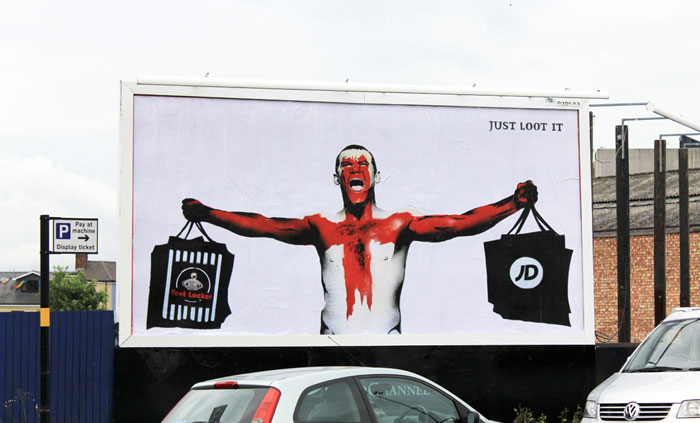 The UK government commissioned a report into these riots titled the Riots Victims & Communities Panel Report. Over 21 communities affected by the unrest and looting were interviewed with a wide range of people taking part. The report highlighted that one of the major underlying causes to this unrest was the ‘You Are What You Own’ culture that is evident across the country and the aggressive marketing of products to young people. The widespread looting was characterized by the focus on fashionable and designer brand shops.

So the following question needs to be asked: Is there a responsibility for the advertising industry that aggressively markets goods to young people and to society at large? The British public think so…

Some of the findings from the report include:

• 2/3rds of those interviewed from deprived areas think that materialism is a problem.
• 85% think that there is too much pressure on young people to own the latest products.
• 70% say that steps need to be taken to reduce the amount of advertising that we are exposed to.

The UK riots were a unique phenomenon, however the effects of constant consumerism cannot be ignored and questions need to be asked if we are going to find answers to the social and environmental problems we face in the western world. If we want to understand our culture and society we had better come to terms with the role and power of commercial images. Advertising does not stress the value of a collective long range future and the prevailing values of the commercial system provide no incentives to develop bonds with future generations. Faced with growing ecological and social crises, and with advertising being the engine of an unsustainable and detrimental economic system we have to insist on alternative values that will provide a humane, collective solution to the global crisis. Our public spaces and shared urban environments must reflect values that are not centered around commercial and individual gain.

British economist Paul Ekins describes consumerism as a cultural orientation in which “the possession and use of an increasing number and variety of goods and services is the principal cultural aspiration and the surest perceived route to personal happiness, social status, and national success.” While this takes different forms in different cultures, consumerism leads people everywhere to associate high consumption levels with well-being and success.

Consumerism has now so fully worked its way into human cultures that it is sometimes hard to even recognize it as a cultural construction. It simply seems to be natural. But in fact the elements of cultures – language and symbols, norms and traditions, values and institutions – have been profoundly transformed by consumerism in societies around the world. Many people today recognize these consumerist symbols more easily than they do common wildlife and if we want a planet that isn’t threatened by resource depletion and climate change, we need to reconsider the influences of commercial images that promote constant, unrestricted consumption.