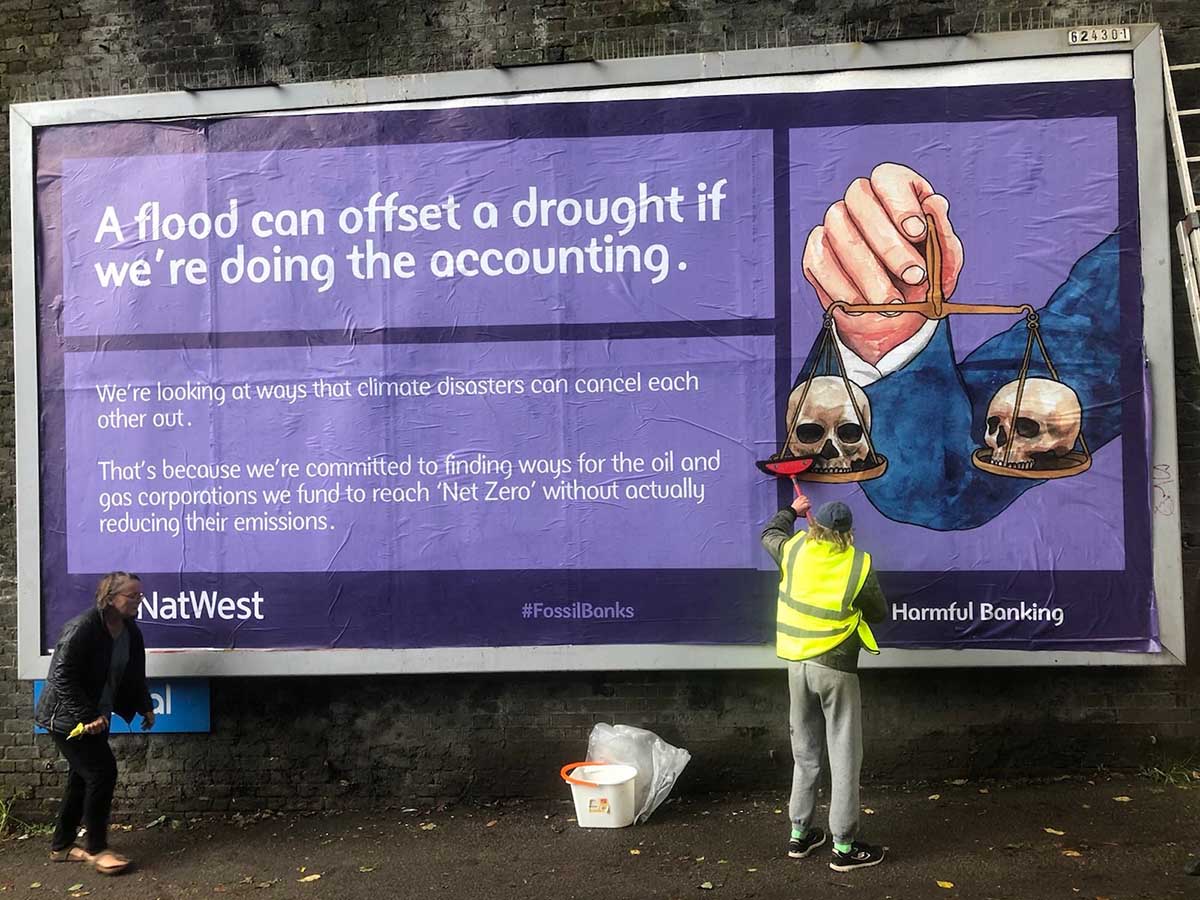 The lending policies of a COP26 sponsor NatWest bank have been called into question in a guerrilla billboard campaign across the UK. Ad spaces have been taken over with satirical NatWest ads spotlighting questionable loopholes in the bank’s climate policy, which allegedly allow NatWest to continue financing fossil fuel companies as long as they proclaim to ‘offset’ their carbon emissions.

Artworks by Darren Cullen and Yasemin Akyuz were installed without permission by Brandalism crews at billboards and bus stops. While the bank has received a reputation boost over its green credentials as one of the principal sponsors of the upcoming COP26 climate conference in Glasgow, climate activists have called out the bank’s supposedly green image as “absurd” owing to its support for fossil fuel companies and dodgy carbon offsetting schemes.

NatWest has said it will require major oil and gas companies to provide a ‘credible transition plan’ to reduce their emissions in line with the 2015 Paris Agreement. But so far, the bank has resisted calls to show what its criteria would be, while CEO Alison Rose has voiced support for carbon offsets as a way of tackling the climate crisis. 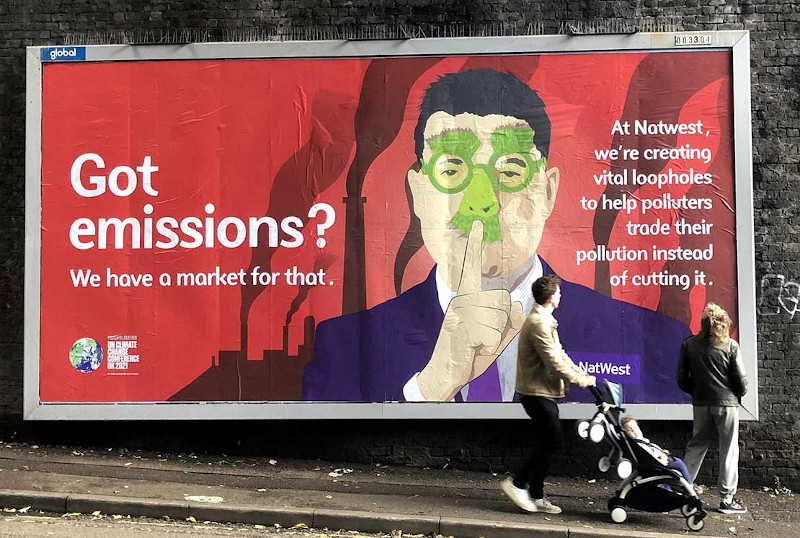 Proclaiming to ‘offset’ carbon emissions is a great way for companies, including major oil and gas firms, to avoid reducing their carbon emissions. By promising to use carbon offsetting and reach ‘net zero’ emissions in 2030, 2040 or 2o50, they can kick the can down the road and delay taking any real action to slash emissions in line with what’s needed to avoid catastrophic climate change.

Meanwhile, offset schemes themselves have been called out as highly flawed – with links to land grabs and climate colonialism, issues around permanence (for example afforestation projects that later burn down, as seen in California in 2021) and false claims such as protecting forest that was never under threat.  (Read more in the recent reports Chasing Carbon Unicorns and The Big Con.)

“NatWest Group wants you to think they are a climate friendly bank. What with them being the banking sponsor to COP26 and launching a carbon offset marketplace on their way to becoming ‘Net Zero Heroes’.

“Nothing could be more absurd. NatWest provides loans and underwriting to companies expanding their oil and gas drilling operations in the Arctic, and their carbon offset platform enables big polluters to keep polluting while passing the buck! We call on the UK government to drop NatWest as banking sponsor to COP26, and NatWest to divest from fossil fuels and stop promoting false solutions like carbon markets.” 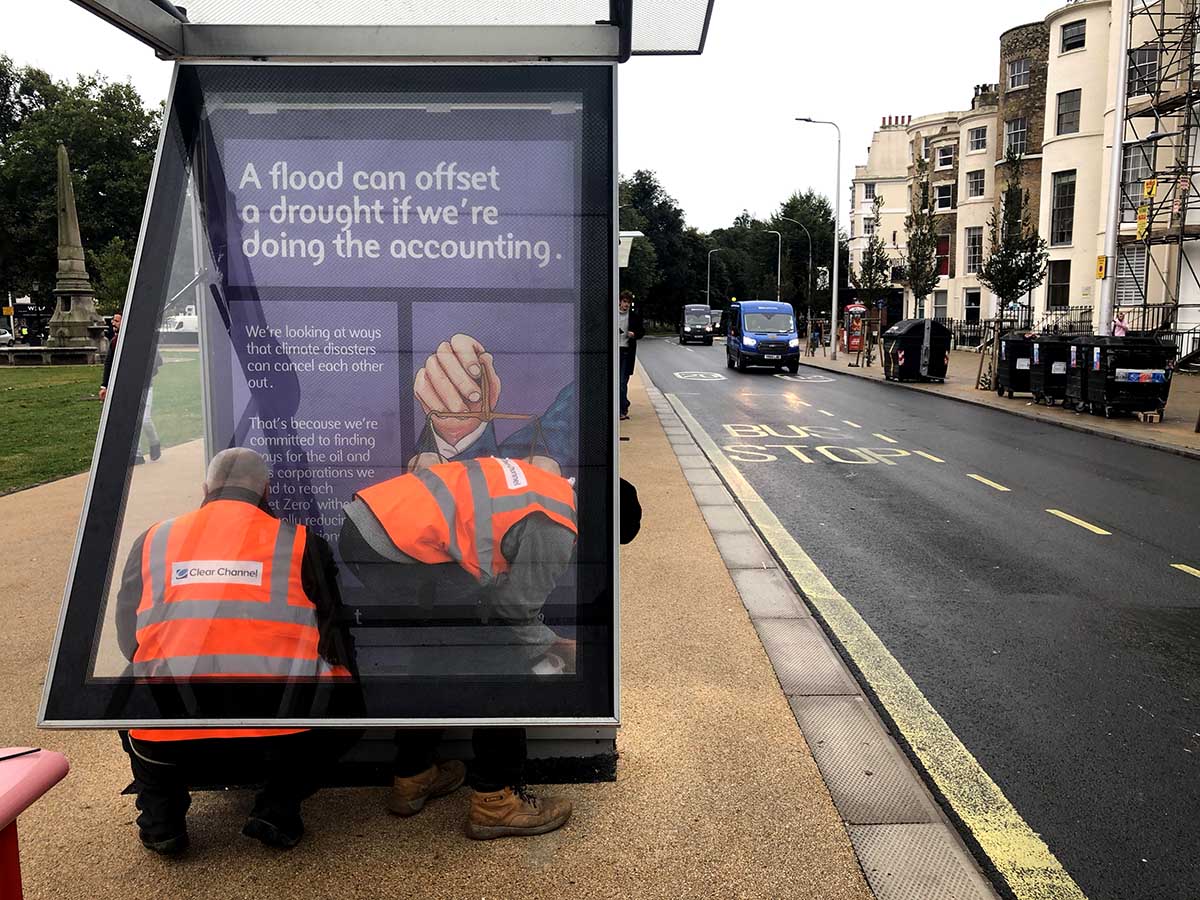 Darren Cullen’s artwork reveals the idiocy of NatWest’s support for carbon offsetting with the words “A flood can offset a drought if we’re doing the accounting” and “we’re committed to finding ways for the oil and gas corporations we fund to reach ‘Net Zero’ without actually reducing their emissions“.

There’s growing pressure on finance ahead of COP26 over its use of offsets, with an open letter last week signed by over 170 organisations arguing that ‘offsets don’t stop climate change’ and calling out offset schemes as ‘false solutions’. 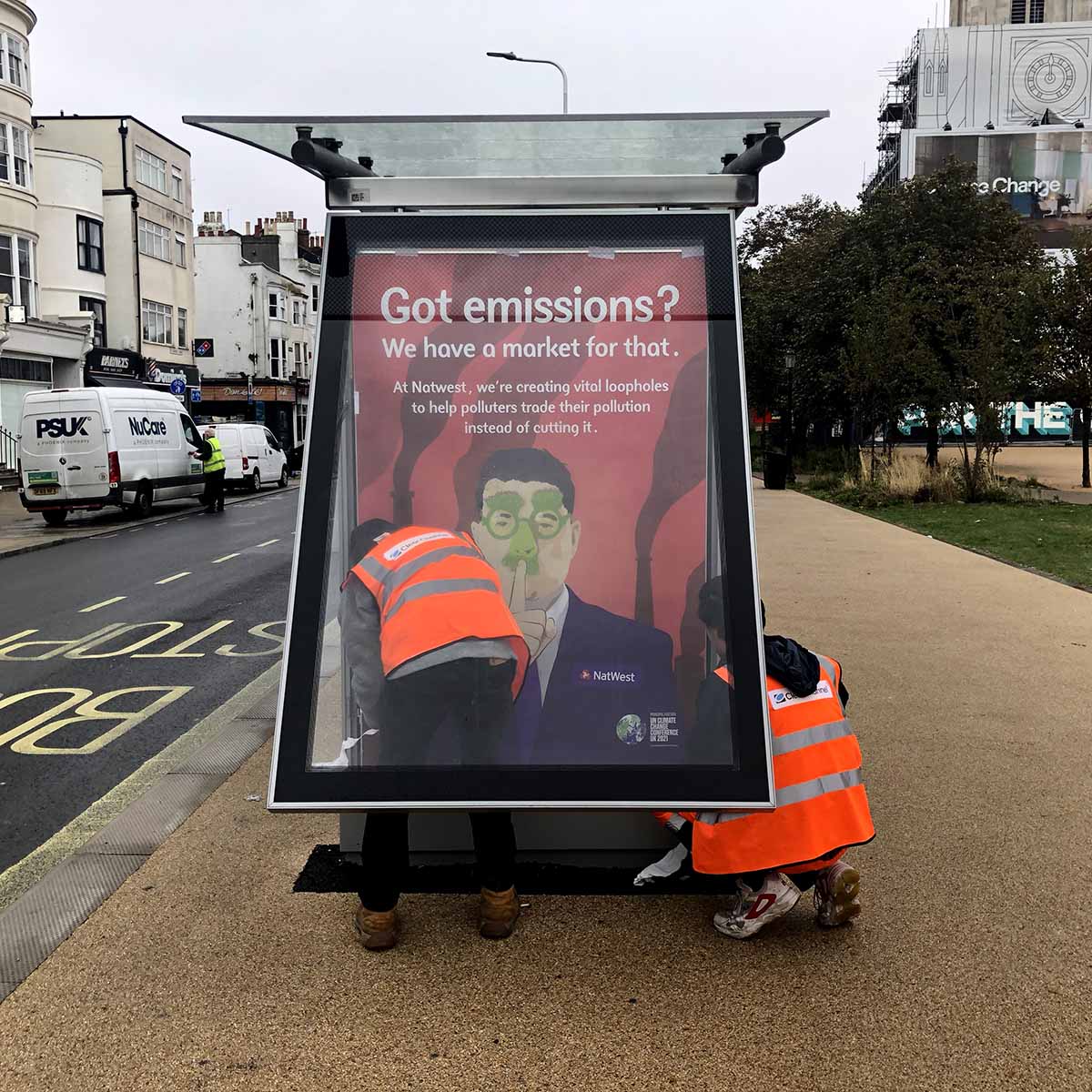 NatWest isn’t the only bank to be relying on carbon offsetting to carry on financing fossil fuels. The spoof ads also target Standard Chartered bank. Although less well-known as a high street bank, Standard Chartered is one of the UK’s biggest fossil fuel financiers, and was the target of a previous Brandalism ad-hack in Liverpool over its polluted sponsorship of Liverpool Football Club.

Standard Chartered’s CEO, Bill Winters, is satirised in an artwork by Yasemine Akyuz that reads: “Carry on Drilling. Our tree planting will take care of the rest”.

Winters is chair of the Taskforce on Scaling Voluntary Carbon Markets, a private sector-led initiative promoting voluntary carbon credits and offsetting as a solution to climate change. The Taskforce has faced allegations of ‘greenwashing’, while under Winter’s watch Standard Chartered has continued to grant billions of dollars to oil, gas and coal firms this year alone. 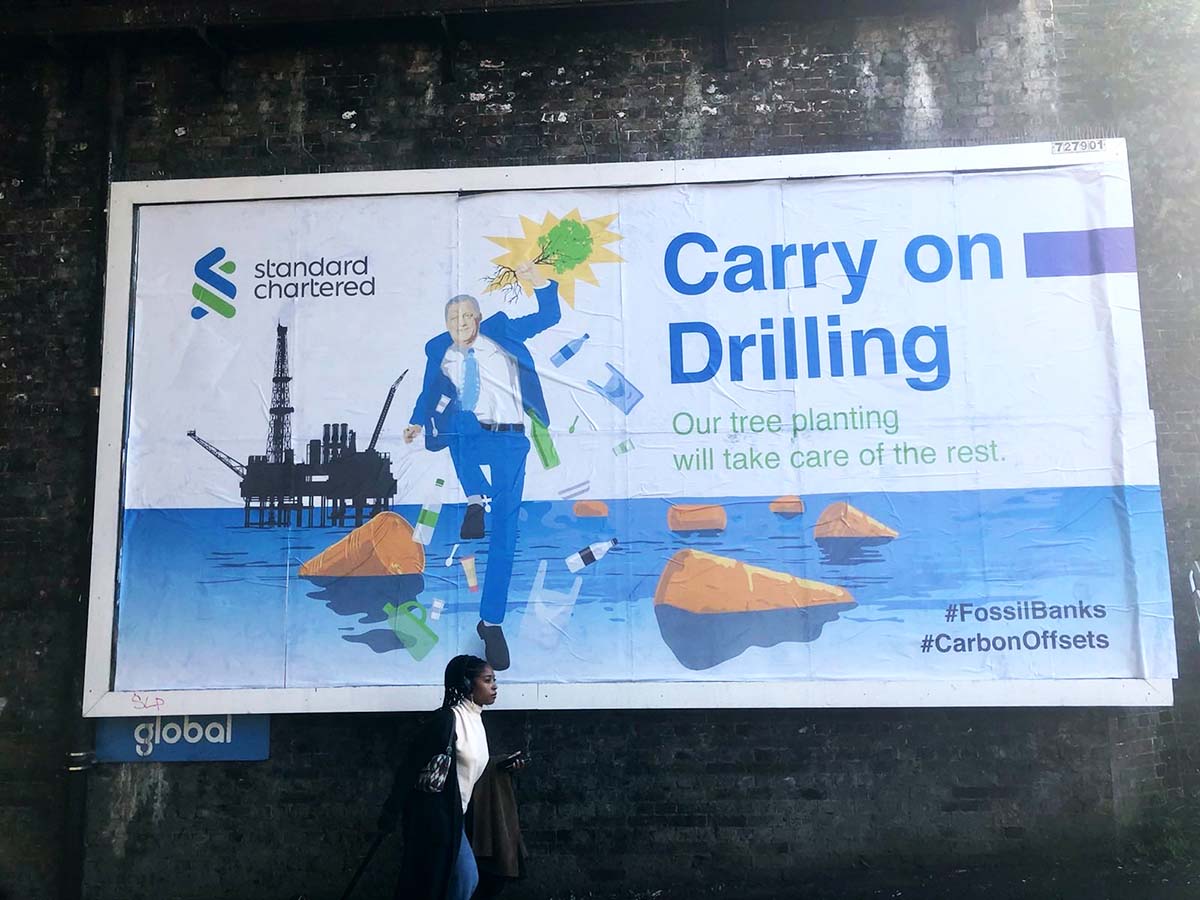 “As sponsor of COP26, NatWest should be attaching water tight conditions to their loans to rapidly transition away from fossil fuels  – but instead, they’re opening the door to dodgy carbon offsets. Major polluters like Shell, BP and Total are misleading customers, promoting offsets as an excuse to justify more oil and gas expansion, aided by their bankers. UK banks like NatWest and Standard Chartered need to stop facilitating these shady loopholes.”

Findings by the International Energy Agency earlier this year showed that no fossil fuel expansion is compatible with achieving net-zero by 2050. Given the IEA’s respected role, groups are urging banks to apply these rules to their fossil fuel clients.